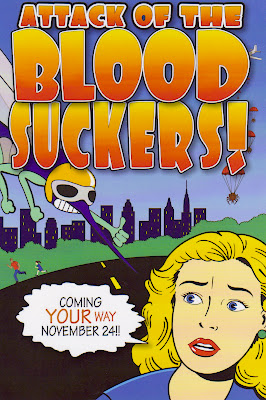 This was without a doubt the most difficult illustration project I have ever worked on. I had only just started to learn Adobe Illustrator when it became clear that I would need to use the program exclusively for the next seven months or so. It was quite a challenge, but the results were well worth the vision we had during our initial meetings last April. Thanks to the EcoTarium Museum's exhibit design staff, Jane's Trust Foundation, my friend Andrew Tang, and Chris Danemayer of Proun Design, I am now completely proficient in one of Adobe's more complicated design programs, not to mention the "Marvel Romance Comic Book" style the exhibit manifested itself under graphically. I also know way more about designing for print than I would care to, especially when it comes to limited Pantone pallets and transparencies!